It has now been half a century! This is a mark indeed to be celebrated under any circumstances, in whatever human endeavor. For me, this is even more special, as the events pertaining to the learning experience to attend the senior year at a first class public High School in the United States of America (USA) constituted a watershed in my life. In 1967, I had been awarded a full scholarship by the organization American Field Service (AFS) to spend one year in the USA, living with an American family and finalizing my high school program, started in Brazil.

In 1968, the news reached me that I had been appointed to one of the top high schools available to the program, in West Hartford, Connecticut, William Hall High School. I was to live with the family of Dr. Kenneth Raven Know, MD., a Geordie by birth, and his wife, Sally, an American psychologist. The couple had three children: Jim, who had about the same age as I; Jenny and Steve, who were younger.

The whole family went to the campus of Hofstra University, where I was receiving important instructions from AFS, in the State of New York, to collect me in June 1968. They were driving a Volkswagen bus about 10 years old. I was surprised, because the family was as excited as I about our social experiment and because I thought all Americans drove brand new posh cars. Of course, coming from Brazil, my background was substantially different than theirs, but we all had an open mind. 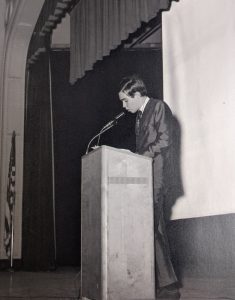 Before school started, in September, my American family took me with them to spend one month at a cottage they had at Squam Lake, New Hampshire. This was excellent, as the experience allowed me to get to know them better and to improve my English. It was then that I started to collect words, which permitted decades later to produce my Noronha Anglo-Portuguese legal dictionary, now available in more than 400 academic libraries around the world, according to Word Catalogue.

Formal education at school was first class. In the late sixties, Hall High had a weekly newspaper, the Hall Highlights, made by the students without censorship and under the guidance of the formidable Mrs. Marilyn Gerhold. There was a news bureau staffed by students. The student council was taken seriously by all. The school taught classes of Japanese, Chinese, Russian, German, Spanish, Latin, Greek and French, in addition to English. All foreign languages had their own clubs, for extracurricular activities.

American and English literature classes were available, in addition to sociology, philosophy and history, both American and Universal. Handicapped students were admitted to the same environment. All sports were available. In some, the students were better than in others, which is natural. Swimming, my particular sport, had a near perfect season. The art club was very popular and had some very talented members. The mechanics club had two women as members, G. Cebelius and Kathy Joyce. The math club had some 20 members.

There was a popular literary club, a literary society and a writers’ club. The World Affairs Club, supervised by one conservative (Mr. Carl Steidel) and one socialist (Mr. John Gale) teacher, organized our participation at a mock United Nations General Assembly at the UN, in a frozen New York City in early 1969. I was at that moment appointed a Brazil representative together with Benjamin Strouse. The school had an orchestra, a Jazz band, a choir, a fanfare and other musical units.

A theater group was much admired by all. Mrs. Adonna Degroat assisted me willingly and in a supportive stance in the excellent library, from which I borrowed heavily. My guidance counselor was the caring Mrs. Faye Kilpatrick. My AFS supervisor was the marvelous Mrs. Johanina Freundel, a Spanish teacher, who would look for me behind the curtains, in case I was to be found hiding with a girl in such unseemly place. The whole harmonious operation was led by a formidable principal, Dr. Robert E. Dunn, who later became the headmaster at the American School of Japan.

The position of the AFS student was one of privilege, because all students had worked hard to fund the scholarship, which contributed to a friendly environment. Nobody told me directly, but I learned that hundreds of cars were washed by my student mates, in order to make viable my scholarship. During my year at Hall High, we reenacted with great success the car wash to fund the next AFS student. I met other AFS students in the region, including Maurizio Martelli, who went on to become vice-dean of the University of Genova and one of the world’s top scientists in artificial intelligence. We remained friends throughout the decades and meet at least twice a year on a regular basis. Lene Gregersen, an AFSer from Denmark was a close friend. She became one of the top European painters and recently did a portrait of mine.

I tried my best efforts at diplomacy in order to have friends and contacts from all quarters, who closely resembled the society at large and who all made their best efforts for me to feel at home. During my stay in the USA, I gave many lectures on Brazil, which was undergoing a somber period of a ruthless dictatorship. The most important of such lectures was addressed to my colleagues at Hall High, the text of which I still keep. Thereafter, I took pleasure in giving lectures and never stopped. I graduated in June of 1969, with General Honors, with great pride.

Making friends at Hall High was by no means a hard task. On the contrary, a lot of ability and flexibility was required to manage all of them and the invitations I received. Mrs. Knox gave me my first diary for my appointments. My lessons of Portuguese language swear words at the student lounge became increasingly popular until they came to a sudden end. That was due to some of our supervisors being called derogatory names in Portuguese.

Now, over half a century since my arrival at Hall High I still remember with great affection many of my friends and colleagues. Of course, Jim Knox and I were brothers and still are. Beth Kling and Dana Fox were close friends. Beth took me to the synagogue, as I had never been to one, and we repeated the experience several times. Dana, who became a medical doctor, with her husband, visited me and my family in Rio and we had a lovely time together. Jo Anne Cooper had a great talent for arts. Linda Lotstein, Jude Spotanski and I would enjoy outings in the snow in the neighborhood.

Bob Grillo always gave the opportunity for a good conversation, when we were not swimming. Kathy Poehnert was always a lady. Al Levenson was my swimming pal then; I hear he is still at it in Santa Monica. Joe Fantone was also a good swimmer. Jay Hershman, Harold Gordon, Dennis Gleason, Brian Cameron, and Dick Scheller were particularly friendly. So were Linda Kennedy, Gwen Hurlburt, Sandy Roedel, Deena Harris, Barbara Elfreth, Brenda Cameron and Anne Pelgrift. In those days, I had the perception that hay rides were one of the most important facets of American culture.

Louise Bronstein was a good photographer in the same way Adele Angle was as extremely talented journalist, who pursued the profession to general acclaim. John Abraham and I shared two particular tastes, always reminded in our conversations, but which I will keep secret in these notes. James Tehan was always concerned with my well-being and would take me to the Catholic church on Sundays. Of my junior friends, I cannot forget my most promising student of Portuguese swear words, Jim Opinsky and, of course, Marilyn Sharpe, with whom I liked to discuss politics. I apologize for the many omissions, on account only of the dense fog of time in my memory. 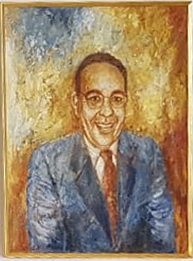 It was also there, in West Hartford, where I learned the joys of work. My allowance paid by the otherwise generous AFS was of US$ 2.00 (two US dollars) a week. Admittedly, this was not very much if one had to go out with friends over the weekends. I thus came to make the proposition of asking the girls out, but with an extended invitation to wash cars in the afternoon. I never had one single refusal. As the cars were all on Concord Street, Mrs. Knox would provide sandwiches and refreshments as well as keep an eye on my bedroom.

At one point, Benjamin Strouse got me a highly paid job carrying mattresses at a deposit. The strenuous effort had me exhausted, but the pay was good. After that job, I never complained of work. I then had money both to take girls out and to buy some clothes. Up to that point, I had resorted to second hand clothes lent me by Mrs. Knox’s friends. One notable exception to borrowing was made by Richard Friedman. He would buy clothes supposedly for himself only to promptly discard them brand new, without any use, with a view to making them available to me.

At Hall High, I made friends who have lasted half a century! But, most importantly, I learned values which have become an integral part of myself, including those requiring an intransigent defense of freedom, of human rights and dignity, tempered by tolerance, decency, charity and respect for the differences in race, creed and nationality. One of my most important academic achievements was to have become sports editor of Hall Highlights, the best student newspaper ever produced. My exuberant headline “Lousy Lacrosse Team Loses Again” still reverberates in my brain, even if I never had it published, to avoid hurting my friends.

I accompanied my American parents until their demise. We met on numerous occasions in many places and they kept up the support work throughout the years, even when I was already a successful lawyer. I still keep a very close relationship with Jim Knox, whom I see very often all over the world, even if he is always threatening the contents of my cellars in a most serious manner and with dangerous determination. My contacts with Jenny and Steve are also close. I have returned to Hall High twice in the past decades, when I had the opportunity to address students. In the last of those occasions, the city of Hartford and the State of Connecticut have granted me honors of which I am very proud.

Thus, it is with pain and very much regret that I will not be able to join my friends and classmates in the celebrations of our 50th anniversary and send all of them my kindest regards and best wishes, together with these notes.

Hall High, class of 69. Lawyer admitted in Brazil, England and Wales and Portugal. President of the Brazilian Union of Writers (UBE). Member of the Academy of Letters of Portugal.