On 5 January 5 2017, Provisional Measure No. 766/2017 was published, establishing a new Tax Regularization Programme.

The new Programme is an opportunity for companies and individuals to pay their tax or non-tax debts, due on or before 30 November 2016, or charged by the tax authorities on or after 6 January 2017.

All debts may be included in the Tax Regularisation Programme, including those that are subject to previous, terminated or active instalment programmes.

In the case of debts under administrative or judicial dispute, it is necessary that the taxpayer withdraws beforehand the disputes involving the debt to be included in the Programme.

The main attraction of the Programme is the possibility of compensating the indicated debts against related tax credits or against tax losses calculated for Corporate Income Tax (IRPJ) and Social Contribution on Net Profits (CSLL) purposes.

Specifically, in the case of tax losses, amounts calculated up to 31 December 2015 and informed in the appropriate tax return until 30 June 2016, by the company itself or by related companies domiciled in the country (controlling parent, controlled subsidiary or sister company) can be used to offset the tax liability.

In addition, any remaining balance may be divided into up to 60 consecutive monthly instalments.

If no credits are used to offset the tax liability, the Programme allows debt payment in up to 120 instalments.

By adhering to the Tax Regularisation Programme within the scope of the Brazilian Revenue Service, companies should be allowed to pay their tax and non-tax debts as follows:

1. Payment of 20% of the indicated debts at sight + amortisation or discharge of the debt against related tax credits; IRPJ and/or CSLL losses + payment of the balance in up to 60 instalments;

2. Payment of 24% of the indicated debts in 24 monthly and successive instalments + amortisation or discharge of the debt against related tax credits; IRPJ and/or CSLL losses + payment of the balance in up to 60 instalments;

3. Payment of 20% of the indicated debts at sight + payment of the balance in up to 96 instalments; or

With regard to debts registered in the Outstanding Debt Record of the Federal government and, therefore, subject to the Office of the Attorney General of the National Treasury, it is not possible to use credits to offset the indicated debts. The taxpayer is allowed to elect one of the alternatives below for the discharge of its debt:

1. Payment of 20% of the indicated debts at sight + payment of the balance in up to 96 instalments; or

It is important to note that, in the case of debts under judicial discussion, an eventual withdraw should not exempt the taxpayer from the payment of legal fees to the Treasury, as occurred in previous programmes.

In addition, the value of each monthly instalment shall be increased by interest equivalent to the SELIC (Special Clearance and Escrow System) rate, calculated from the subsequent month after inclusion of the debts in the Programme until the month previous to the payment, plus 1% in relation to the month in which the payment is made.

The taxpayer can be excluded from the Programme, resulting in immediate liability of all debts included, if it: (i) fails to pay three consecutive instalments; (ii) does not pay six alternate instalments; or (iii) does not of one instalment, if all the others are paid; (iv) other factors, such as bankruptcy, extinction, squandering of resources, and declaration of unfitness of the taxpayer’s registration (CNPJ).

The Programme in question will be regulated by the Brazilian Revenue authorities and by the Attorney General of the National Treasury within 30 days.

Once regulated, the taxpayer must sign up to the Programme within a maximum period of 120 days.

The Tax Department of Noronha Advogados remains at full disposal to assist its clients and provide any clarification that may be necessary.

Gratuated at Universidade do Estado do Rio de Janeiro (UERJ) in 2006. 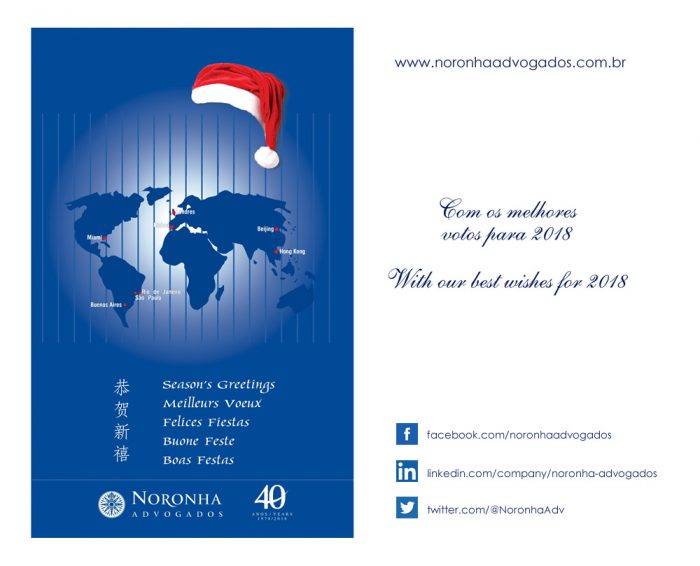