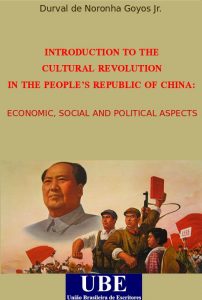 True writer, Durval de Noronha Goyos Junior unravels and leads between the ins and outs and inset of the difficult Chinese domestic politics, in order to make us understand the determined pursuit of this people to overcome major obstacles to the development of its country. He reveals in a clear and simple way the main cultural foundations of this people, heirs of personal and governmental regulations prescribed by Confucius (551 BC – 479 BC), and that have allowed the Chinese people to accept, within its faith, but also under a dialectical perspective, the unquestionable conduction of its leaders until the present days.
AUTHOR: Durval de Noronha Goyos Jr.
PUBLISHING HOUSE: Editora UBE
São Paulo, SP, Brazil