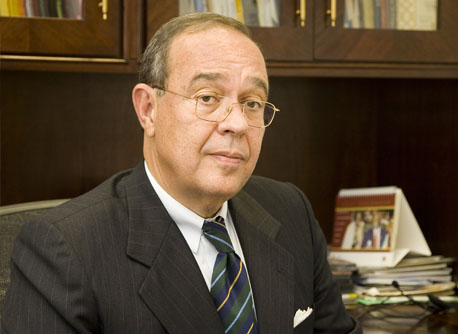 Senior partner, founder and president of the Executive Committee of Noronha Advogados

Dr. Durval de Noronha Goyos Jr. is member of the Brazilian and Portuguese Bar Associations and he is also admitted in England and Wales as a solicitor. He graduated from Wm. Hall High School, in West Hartford, Connecticut, USA, in 1969 as an AFS scholar to join the law school of the Catholic University in São Paulo, Brazil, graduating in January of 1975, followed by post-graduate courses, including a programme on Constitutional Law, at Hastings College of Law (University of California), in San Francisco, USA and revalidation of diploma at the University of Lisbon, Portugal. Dr. Noronha was an “ad-hoc” Brazilian government representative for the Uruguay Round of the GATT in 1992 and 1993 and the President of the Brazilian Bar’s commission on the GATT. Dr. Noronha is an arbitrator for the World Trade Organisation (WTO), based in Geneva, Switzerland, having previously been an arbitrator for the General Agreements on Tariffs and Trade (GATT). Dr. Noronha was also appointed as an arbitrator of the China International Economic and Trade Arbitration Commission (CIETAC), Beijing and Shanghai and also is an Arbitror of the South China International Economic and Trade Arbitration Commission (SCIA), China. He was a member of the International Commission of the Law Society of England and Wales. He was the Brazilian Bar’s chief negotiator for the agreements on the legal professions within MERCOSUL and is the correspondent in Brazil of the publications “International Trade Law and Regulation”, Oxford; “World Markets Research Centre”, London, UK; “Trade Practices Law Journal”, Sydney, Australia; member of the editorial board of the publication “International Trade Reports”, Cambridge UK, President of the UBE (2015-2019), and Member of the Board of Trustees of the Padre Anchieta Foundation (TV Cultura). President of the Institute and of the Editorial Council of the Confucius Institute – UNESP. Member of the Academy of Letters and Culture of Portugal. Member of Maurício Grabois Foundation.

Books published:
His books and articles, published in six continents include:

Lex Editora:
“THE ROLE OF THE LAWYER IN  BRAZIL’S FOREIGN RELATIONS “

Member:
Dr. Noronha is  a member of the American Bar Association, Mercosul Association for the Rule of Law in International Relations (Chairman), Associazione Giuristi di Lingua Italiana, Association of Fellows and Legal Scholars of the Centre for International Legal Studies, Vienna, Austria, Union Internationale des Avocats (member of the National Executive Committee), the Latin-American Society of Labour Law and Regional Integration (counsellor), the Florida Bar (Consultant in Brazilian and Portuguese law) and the California Bar(consultant in Brazilian Law).

Languages of professional use:
Portuguese;
English;
Italian; and
Spanish.

Languages of social use:
French; and
Mandarin.

Articles published:
Dr. Noronha is a columnist for Jornal do Brasil (RJ) since 2001, and the legal site Ultima Instancia, apart from collaborating on various Brazilian and international publications.